We send occasional emails with our latest photos where we take you along for the ride through our life. 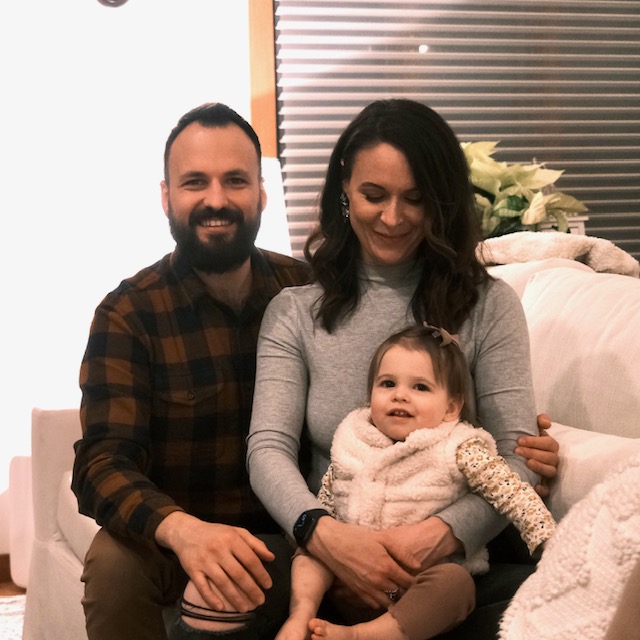 A personal diary of photos taken with the Fujifilm X100V camera.

Ivy’s first day of school, a quest for a juicy lucy, and our new favorite restaurant.

These past couple of weeks we’ve been cozying up at home waiting for this winter to blow over. We have gotten out a few times, but nothing that would warrant its own post. However a couple of interesting things have happened so we’ll post them here:

Growing up when there was any possibility of a snow day, we had to get up early to watch the news and see all of the names of schools go by to see if ours showed up.

If you missed it on the marquee, you had to wait for all of them to come across the screen again.

Now, everyone gets an automated phone call to let them know. There’s something kind of fun about the anticipation, and it was rare that our school showed up.

Even though Ivy is not yet in school, we treated her to our own snow day. We rode around in the sled, built a snowman, and chucked a few snowballs at our window.

It was the perfect transition into Christmas.

It’ll be so fun the bigger Ivy gets to see the excitement she gets when opening up presents.

She’s going to a Montessori School soon, so they start potty training there. Naturally, she got her first toilet, which she’s taken out for a few spins already, along with her new trike. Spring can’t come soon enough for her to roll that bad boy down the block (the bike).

We had my immediate family over Christmas Day, and my sister in law made a charcuterie-tree (a “charcutertree” ?). How cool is that? The little ones had a blast, and there were even some moments of silence—the ultimate present a child can gift (even though V doesn’t remember this).

We hope everyone had a happy and healthy holiday!

We used to get together with my dads side of the family growing up, and just as people got older we stopped.

But now that we have Ivy, Andy (my brother) and his wife have two boys, and my cousin Rachel has a little girl, it’s so much fun to get together for the kids.

We went to my aunt and uncles house and just had the best time. It’s so cool to see all of the kids playing in the same house we all grew up playing in. My aunt had the best playroom. If I was 2 years old, I’d be in heaven.

We were in charge of desserts, so we brought a tray of a few of our favorite cookies—my mom makes homemade caramels with her brother every year, and we decided to make Spritz cookies (V’s favorite). My mom and Grandma always made them growing up, but had trouble with the cookie gun. I decided to find a new one and give it a go. Vitaliy proved to be the best man for the job with his meticulous skills and attention to detail.

They tasted just as good as they looked.

“Back her in if you want to see tears,” they said.

For those who don’t know, I (Jen) grew up in White Bear Lake, Minnesota.

I moved to California in my 20’s where after living there for about 5 years, I met Vitaliy.

Just as life did for everyone else, COVID brought on some changes for us.   One day, we had to make a change in our living situation, so we decided: “why not move to Minnesota?” I was hesitant of the winters, but Vitaliy grew up in Latvia where the climate was similar.

This Christmas, I was eager to show him a lot of the memories I had growing up, especially now that we have a little one. Anyone who is familiar with Downtown White Bear Lake knows about its charm, small town feel, and just how 4th Street in wintertime resembles a Hallmark movie.

What better place to have Ivy meet Santa?

We didn’t know what to expect, but we had been talking the guy up for weeks. She knew just who he was when she saw him, but upon their meeting, she just stared at him. We were fully expecting the classic cry when meeting Santa face. Maybe next year.

Vitaliy and I also went on our Friday date night. My mom watches Ivy every Friday night while we try a new restaurant.

This was the first time we tried a restaurant for a second time—Estelle in St. Paul. It has a small, intimate, modern atmosphere, and pretty great food. It’s hard to make a spaghetti out of this world, but they did a pretty good job.

If you’ve ever gotten to know Vitaliy, you know he will teach you a Russian card game called Durak, and you’ll be hooked. So we bring our deck of cards along and play a few games, have a few laughs and enjoy our dinner. Best part of the week!

This was the first time Vitaliy took the Fujifilm X100V out for a spin. This was an impromptu walk around our neighborhood like many of them are. If you have a child in winter weather, you know that it can be tough keeping them occupied indoors.

Ivy loves walks. Just like us, I think it helps her wind down, relax, clear her head, and get some fresh air. This was right before our big cold spell around Christmas, so we had to get out there and soak it all up.

Walking is something we do year round. This time of the year it's a little less lush, however its so fun to see the beautiful Christmas lights, glistening snow on trees, and shiny icicles, plus, this one guy we always pass who tells us how “cute our little guy is” 🤣. As you can see, she has a pink hat on with flowers on both, her blanket and snowsuit, but it always gives us a laugh.

Ivy was so small last winter and we didn’t get out as much then, so its fun to realize that she’s experiencing some of these things, and see them for the first time through her eyes.